Posted on December 5, 2012 by Stephen McCallister

The Winter of 2001 was the most difficult period of my family’s life. A lot of what follows is pretty grim, but trust me and hang in there – I do get to the snowman.

In May 2000, on my parent’s 50th anniversary, we visited and found out that Dad had a “bump” on the side of his neck. It was actually a disturbingly large lump, but visits to the doctor had been inconclusive. A couple weeks later he was referred to the University Hospital in Seattle, where it was diagnosed as a salivary gland cancer. He had disfiguring surgery to remove the tumor, but some of it was wrapped around an artery and could not be removed. Thus began a month of radiation treatment, followed by disappointment as it became clear the tumor was again growing.

By the end of 2000, my father was on enough Oxycontin to kill 5 addicts, sleeping much of the day and not feeling great when he wasn’t sleeping. Because of the heavy painkillers, when he was awake Dad was sometimes hallucinating and paranoid.

The rest of the family wasn’t doing much better. My Mother, in particular, bore much of the caretaking and one evening suffered heart failure. 911 was called, but when the ambulance arrived, my Dad was convinced they were bad people coming to get him, so he locked the doors and wouldn’t let them in. A wonderful, trusted neighbor across the street saw the commotion and managed to convince him it was OK, and my Mom got to the hospital.  At 3 AM that morning, I got a phone call from the neighbor explaining the situation. Living 150 miles away, I was in my car within minutes and by early morning had relieved the neighbor of sitting up with my Dad and visited my Mom in the hospital.

My sister lived near my parents, and she was of course great support to them, visiting daily. I came over the mountains every weekend for six months, visiting and offering what aid I could. But the weight of this was overwhelming for her, as for the rest of us.

I spent New Year’s Eve 2001 with my Mom in the hospital and me at home alone with my Dad. At the start of the New Millennium. I sat reflecting on the last decade, remembering at the start of the 1990’s my wife’s father survived a heart attack and it seemed then that the 90’s would be marked by sorrow and loss. My Dad woke up and came out of his bedroom to watch television at about 8 PM, and we watched for a while together, maybe the least excited pair on the planet for the prospects of the New Millennium.

A few weeks later, my wife, daughter and I spent the weekend with Dad and Mom. While we were visiting it snowed, a bit of a novelty for us since “real snow” in the Seattle area is rare. Someone mentioned that it would be a good idea to make a snowman – we hadn’t done that for years, and perhaps it could lighten the mood. We assembled charcoal, twigs for hair, a small green dog Frisbee disk for a mouth. My Mom – who was always one for making crafts – suggested that she could fill a spray bottle with water with food coloring in it, so we could “paint” the snowman and make clothes for him.

Thus, my wife, daughter, my sister, and I went out into the yard in front of the living room window to make a snowman. Not just any snowman like a kid could make, but the kind of kick-ass snowman that a group of clever adults with the right materials and creative ideas could make.

It was near-zero, so we thought that if we constructed arms and sprayed them with the ice cold water, they would freeze and stay in place. A snowman with arms! The twigs would make dramatic hair for our creation, and once the eyes, nose, and mouth were in place, we would spray clothing on to our creation.

Alas, though we thought we were armed to the teeth with materials and artistic inspiration, we were actually a bunch of stressed out people, barely hanging on. The snowman was our attempt at normalcy, but our lives were anything but normal.

The result of our work was not the triumph of technique and artistic vision we hoped for. In fact, it what we created looked more like the project of a voodoo cult transported to a frigid climate –and none too happy about it. Instead of clothing, the red spray looked more like blood splatter from a very special CSI episode with guest star Frosty the Snowman. Its twig hair standing on end, broken stubs of arms, and the round green Frisbee mouth all screamed: bad shit went down here.

The four of us making the snowman eventually realized the monster we had created. We didn’t so much as finish the snowman as abandon it, all of us laughing in disbelief at our folly. I did manage to take a photo, an attachment to an email dated January 27, 2001 which to this day I keep in my email inbox.

Back inside the house, the critics were not kind to our art. My Dad was direct: “You get to go home, but I have to look out the window at that thing.” Mom was naturally concerned what the neighbors would think. But in the end they didn’t fuss too much and the snowman stood, soon to expire of natural causes.

In March my father died. Three months later, my Mother died of heart failure while visiting us, the night before my daughter’s high school graduation. That year was a blur for us. We made it through, wounded and grieving, slowly better but never healed.
Our holiday rituals reversed, with my sister now coming to Seattle to share holidays with us. It was different, but we were together. It was too painful to think a lot about that year, and too hard not to. 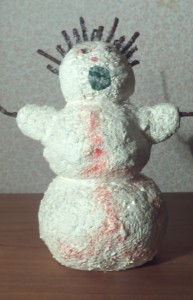 My sister Cindy, I should mention, did inherit my Mom’s artistic genes. She is a crafting genius, who has over the years made many beautiful holiday gifts for us. In fact, three years later at Christmas we got a special gift. It was a Christmas ornament: a small, exquisitely detailed, recreation of that snowman. It hangs on our Christmas tree every year, to this day.

Posted in Life | Comments Off on The Snowman